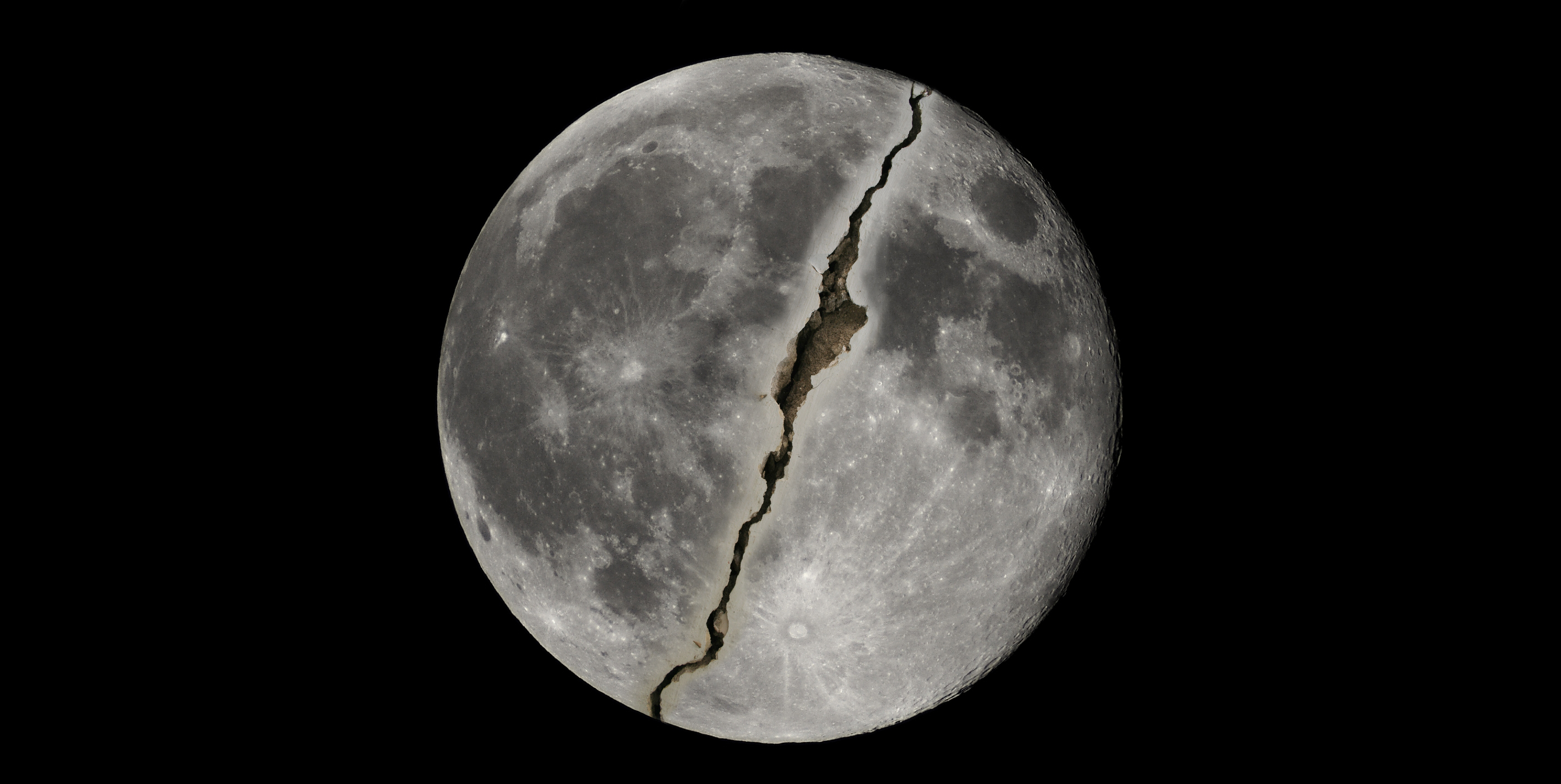 Among many miracles of the Greatest Holy Prophet Muhammad (peace and blessings be upon him and his progeny) one is splitting of the moon.
It was narrated by Anas bin Malik (may Allah be pleased with him): “The people of Makkah asked Allah’s Apostle to show them a miracle. So he showed them the moon split in two halves between which they saw the Hiram’ mountain. (Translation of Sahih Bukhari, Merits of the Helpers in Madinah (Ansaar), Volume 5, Book 58, Number 208)”
It is now proven in two ways:
1) By NASA photos.
A Picture from NASA:
2002 October 29

A Lunar Rille
Credit: Apollo 10, NASA
Explanation: What could cause a long indentation on the Moon? First discovered over 200 years ago with a small telescope, rilles (rhymes with pills) appear all over the Moon. Three types of rilles are now recognized: sinuous rilles, which have many meandering curves, arcuate rilles which form sweeping arcs, and straight rilles, like Ariadaeus Rille pictured above. Long rilles such as Ariadaeus Rille extend for hundreds of kilometers. Sinuous rilles are now thought to be remnants of ancient lava flows, but the origins of arcuate and linear rilles are still a topic of research. The above linear rille was photographed by the Apollo 10 crew in 1969 during their historic approach to only 14-kilometers above the lunar surface. Two months later, Apollo 11, incorporating much knowledge gained from Apollo 10, landed on the Moon.
This is What God told us more than 1400 years ago:
In the Name Of Allah The Most Gracious The Most Merciful ((The Hour (of Judgment) is nigh, and the moon is cleft asunder.))
Sura 54:1(Al-Qamar( The Moon))
This lead a British citizen to embrace Islam after he saw a TV program by NASA. He read Quran and thought that moon splitting was nonsense. But he revised his stand after seeing the program.
2) By the Indian King of Kerala that witnessed it and had a journey to the Arab peninsula to meet the Holy Prophet (S.A.W.) and be a Muslim. The journey he never came back from. He died on his way back in the Arab peninsula and was buried there. His descendents who remained faithful to their original religion allowed a mosque to be built in their kingdom and did not interfere with Muslims. Also they still exist and witness the truth of the story.

Chakrawati Farmas King of Malabar, India
The incident relating to King Chakrawati Farmas is documented in an old manuscript in the India Office Library, London, which has reference number: Arabic, 2807, 152-173. It was quoted in the book “Muhammad Rasulullah,” by M. Hamidullah:
“There is a very old tradition in Malabar, South-West Coast of India, that Chakrawati Farmas, one of their kings, had observed the splitting of the moon, the celebrated miracle of the Holy Prophet (S.A.W.) at Makkah, and learning on inquiry that there was a prediction of the coming of a Messenger of God from Arabia (Detail given bellow), he appointed his son as regent and set out to meet him. He embraced Islam at the hand of the Holy Prophet (S.A.W.), and when returning home, at the direction of the Prophet, died at the port of Zafar, Yemen, where the tomb of the “Indian king” was piously visited for many centuries.”
The old manuscript in the ‘India Office Library’ contains several other details about King Chakrawati Farmas and his travel[1].
The king spent weeks in seclusion. In the midst of his quiet life, he set out on the journey along with the Arab travelers who had promised him earlier. On the way, they stopped by Koylandi and from there to Dharmapatnam where they halted for 3 days. Then they set out to Shehr Muqalla. On reaching there, they set for the Hajj pilgrimage and thereafter returned to Malabar. He aspired to spread the message of Islam. But on the way, he fell sick and breathed his last.
A tradition of the Holy Prophet (S.A.W.) has also been reported from one of the companions, Abu Saeed al Kaudri, regarding the arrival of Cheraman Perumel. “A king from India presented the Messenger of Allah (S.A.W.) with a bottle of pickle that had ginger in it. The Holy Prophet (S.A.W.) distributed it among his companions. I also received a piece to eat “. (Hakim reports in ‘Al Musthadrak)

Umar Qazi’s poem on Cheraman Perumal
Umar Qazi was well aware of the story of Cheraman Perumal – the first Indian to accept Islam. He narrates it thus in one of his poems inscribed on the walls of Ponnani Juma Masjid.
Kodungallur was a center of festivals established by the great Emperor Cheraman Perumal.
The major part of all the minor kingdoms were under his rule …
As such, one day he saw he saw the moon split into two (a miracle of Holy Prophet (S.A.W.) performed in Arabia) on a clear cloudless night. As a result the love for Holy Prophet (S.A.W.) grew in his heart and he became the earliest Muslim of this nation….[2]

Moon Splitting in the Quran
The splitting of the moon is mentioned in the Holy Qur’an, Surah Al-Qamar (54), Verses 1-3:
The hour drew nigh and the moon was rent in twain. And if they behold a portent they turn away and say: Prolonged illusion. They denied (the Truth) and followed their own lusts. Yet everything will come to a decision.

Other Relevant Notes
It is due to this incident about their king, the people of Malabar became the first community in India to accept Islam. Subsequently, they increased their trade with Arabs, as the Arab ships used to pass by their shores on the way to China before the advent of Prophet Muhammad (S.A.W.).
Before Prophet Muhammad (S.A.W.), Malabar also had a Christian community dating back from the earliest followers of Prophet Jesus (‘Isa). St. Thomas is believed to have migrated to India and died there. This community remained untouched by later theological developments in Christianity until the arrival of Portuguese traveler Vasco da Gama.
When the British were consolidating their stronghold in India, they deployed the largest naval operation (on the shores of India) against the Muslims of Malabar[4].

Predictions of the coming of a Messenger of God from Arabia
Prophet Muhammad (S.A.W.) was commanded by God to inform that he was not the only Messenger of God to the world [Al Qur’an 46:9]. Scholars say that there had been some 124,000 Prophet sent to the world who preached in the language of the respective people [A Qur’an 14:4]. The true religion they preached and their scriptures got corrupted with passage of time (with the exception of Al Qur’an).
However, the message on the last and greatest Prophet Muhammad (S.A.W.) is retained till date in the scriptures of all major world religions.
The Hindu scriptures identify the greatest Prophet to come mentioning details of his birth, events of his life, his followers, etc. Some even give his Arabic name or its equivalents! This article will help creating right belief (Iman) in other religionists.
Further, it will help Muslims appreciate yet another facet of greatness of Prophet (Pbuh) and deepen their Iman. We will see here only a sample of the overwhelming evidences!

Prophet (S.A.W.) Foretold in India’s Hindu scriptures
There is no doubt that God sent Prophets to people of India. There is no mention of any Indian Prophet or scripture in Holy Qur’an. But Bukhari records Prophet Muhammad (S.A.W.) as saying he was enjoying breeze wafting from India laden with fragrance of Tawhid (unity of God). The four Vedas (scriptures) of Hindus and their epics are said to be 5000-10,000 years old. They contain a great deal of monotheistic ideas, and of course, prophecies on Hadrath Muhammad (S.A.W.).

Bhavishya Puran
This is a Sanskrit work of prophecies. The title means ‘Book of the Future’. Since Hinduism is based in India it was, and still is, taken for granted that its sages will be born in India itself. Contrary to this belief the Book says that a great master will appear in a foreign country (mlechcha acharya) and live in a sandy region (marusthal). His name will be Mahaaamad. Within a short span of 18 couplets Mahaamad is mentioned five times.
There is an interesting information in Bhavishya Purana that Mahaamad would appear to Bhoj, ruler of Dhar, and say that he would establish the religion of meat eaters, by the command of Ishwar i.e. God.
There is a tradition that long afterwards, Bhoj got terrified on seeing the full moon split into two. Learned men consulted holy books and told him that it was one of the signs of the Universal Master to be born in a country to the West. Bhoj sent his minister to Prophet (S.A.W.) in Arabia, who named the king as Abdullah. The tomb of Abdullah is still there at Dhar…

Mahabharat
This is a Hindu epic describing the struggle and triumph of good against evil. It was written by sage Vyas who also authored Bhavishya Purana. Mahabharata says that in the last eon called Kali Yug (in which we now live) a great sage will appear with name Mahaamad. He would preach about unity of God. He will be driven away from his native place by his own folk. By him the world would get peace. (Islam means peace). Mahabharat further says that cloud will provide him shade. It is recorded in history that Buhaira, the Christian priest of Syria observed this sign with Muhammad (S.A.W.) in his boyhood and identified him as the last Prophet anticipated for millennia.

Kalki Puran
The signs and events of the final Avatar Kalki point out to final Prophet Muhammad (S.A.W.). They fit those of Muhammad (S.A.W.) neatly and perfectly. They are as follows;
 Kalki will appear in the last on Kali Yug and will be the guide for the entire world.
 He will be born on the 12th day of the month. Prophet (S.A.W.) as born on 12th Of Rabiyyul Awwal).
 His parents will be: Vishnu Bhagat and Soomati meaning servant of God (the Cherisher) and peace. (Messenger’s father’s name was Abdullah, God’s servant and mother was Amina refuge giver which includes the idea of ‘peace’.)
 He will be with a beauty par-excellence. His body will be fragrant.
 He will get wisdom on a mountain. (Messenger (S.A.W.) was conferred Prophethood on Mt.Hira)
 He will receive a horse from God, which will be faster than lightning. Riding it he will go around the earth and seven skies. (During Mi’raj Prophet (S.A.W.) got Buraq meaning lightning and toured the entire universe.)
 Kalki will split the moon. Like Bhoj, Cheraman (Zamorin) Perumal the ruler of Indian kingdom of Kerala, witnessed splitting of the moon performed by Prophet (S.A.W.). After gathering the facts he sailed to Arabia and became Muslim at Prophet’s (S.A.W.) hand. His Tomb is near the city of Salala in Oman[5].
References:
[1] See: “Chakrawati Farmas King of Malabar India” by Dr. Z. HAQ at http://cyberistan.org/islamic/farmas.html
[2] See: “Cheraman Perumal, the First Indian to Accept Islam” at http://jaihoon.com/watan/perumalfirst.htm.
[3] See: “Did Prophet Muhammad (S.A.W.) really split the moon with his index finger” at http://www.answering-christianity.com/moon_split.htm
[4] See: ” Chakrawati Farmas, King of Malabar, India” by Dr.Z.HAQ at http://cyberistan.org/islamic/farmas.html
[5] See: “Ultimate Prophet (S.A.W.) Foretold” by M. I. Liaqat Ali at http://www.geocities.com/WestHollywood/Park/6443/Muhammed/scriptures.html. 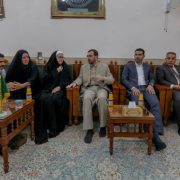 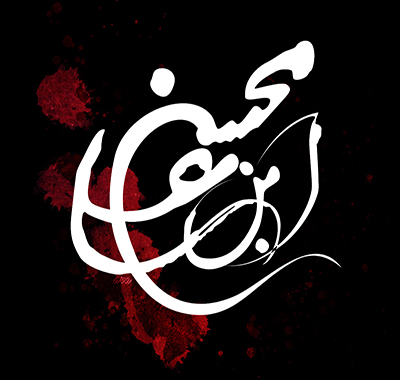