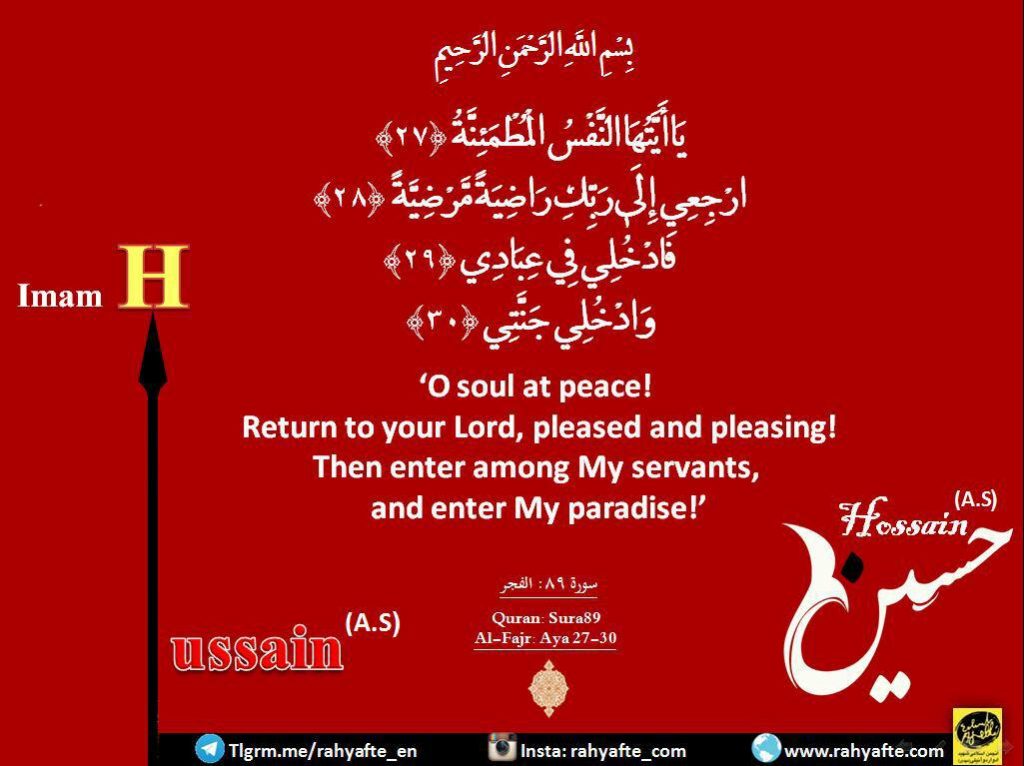 SHAFAQNA- Recite Sura e Fajr in the compulsory or recommended namaz as the Sura belongs to imam Husain ibn Ali alaihis salam. The one who recites it, on the judgment day the status of the companion of Imam Husain alaihis salam will be granted to him in the heaven.

By Ayatullah al-Uzma Nasir Makarem Shirazi in Tafsir Namuneh
Translated from Farsi into English by Fatima Zabeth Beenesh
This sura was descended in Mecca and has 30 ayat.

And they had created a lot of deterioration and corruption there.
فَأَكْثَرُوا فِيهَا الْفَسَادَ (89:12)
فَسَادَ is every type of cruelty, oppression, transgression, too much indulgence in desires, living in pleasure and revelry. Actually it was the effects of their rebel. Every rebellious tribe at last will plunge into decay and deterioration from every direction.
Later in one valuable sentence pointed towards the punishment of these disobedient tribes and added: Hence the Avenger and Dominant God punished them with whip of torments.

Yea the culprits shiver when they see those views and get awake. The veil of agony and anxiety will cover their faces and he would look upon his past and become extremely desperate but this depression will not be of any help. The man desires to return back and correct the dark past. Alas! The doors of return will be completely closed.
He would like to compensate but its period will get over.
He would desire to do virtues deeds to wipe away his evil deeds but the file of his deeds would close down.
Here he cries bitterly and said: I wish I was sent the righteous deeds in the life.
يَقُولُ يَا لَيْتَنِي قَدَّمْتُ لِحَيَاتِي (89:24)
The notable thing is that the culprit does not wish for hereafter, but he states only for this life. This worldly life is full of hardships and miseries which is perishable and temporary but it is not a life. The same way in the ayat 24 of Ankabut it is stated: Surat Al-`Ankabūt (The Spider) – سورة العنكبوت
The definition
The master of convinced heart
After mentioning the dreadful punishment that grips the rebels and the adorers of the worldly life on the judgment day, the ayat under the discussion describes the situation opposite it and mentiones the people who have contented self. The believers who in spite of that extraordinary and notable cyclonic catastrophe of judgment day, their hearts are totally in peace and certainty. They address each other in profound love and kindness.
يَا أَيَّتُهَا النَّفْسُ الْمُطْمَئِنَّةُ (89:27)
O the possessor of the contented heart
And return towards God, the Sustainer he is satisfied with you and you are convinced and pleased with him.
ارْجِعِي إِلَى رَبِّكِ رَاضِيَةً مَّرْضِيَّةً (89:28)
And enter among my righteous believers.
فَادْخُلِي فِي عِبَادِي (89:29)
And enter in my heaven.
وَادْخُلِي جَنَّتِي (89:30)
How interesting, heart stimulating and soul nurturing interpretations is this ayat which pour the purity, calmness and confidence in man.
The straight invitation of the Sublime Provider God to the people who under the shadow of their believe reaches the state of certainty and trustworthiness.
They are invited to return towards God, the Lord, the Reformer and the instructor.
The invitation which fills the capacity of the heart with satisfaction, the contentment of the sweetheart lover from the beloved and the pleasure of the beloved who is the real God, the Generous and the Maintainer.
After adorning the believer with the crowning glory for his servitude, labor and toil in the love of God, he gives him the grand place among the specific group in the Paradise of the Exalted and the Acceptor of Repentance God.
The Invitation is given to him to enter the Paradise by addressing them ‘enter into my heaven’ which indicates the host is only and only the Generous and Holy God. What an over honored invitation, what a superb host and what a privileged and sincere social gathering.
Here the term النَّفْسُ means the human soul.
The meaning of the الْمُطْمَئِنَّةُ is pointing towards unlimited peace which he attained under the radiance of the faith, thus the sacred Quran said: Sura e Ar-Ra’d [13:28]

Without doubt in the remembrance of Allah do hearts find satisfaction?
This heart full of contentment and certainty at the promises of the Just and Trusted God, delighted with the path which he selected, in accepting the world as well as rejecting the world. In the moments of disturbances, the events of turmoil and more than everything at that horrible, heart aching and torturing hours of the resurrection day’s catastrophe, he is in calm and tranquil state.
The term return towards God, ‘the source of all Goodness who covered the creatures with all his kindness, according to some interpreters it is the return towards his kindness and virtues. It is better to be said to return back to take a place near him. It is spiritual and ethereal return and is not the physical return to a particular place.
This invitation is for only the Day of Judgment or when the life ends the moment one dies?
Mostly the ayat are concerned to the day of resurrection but its definition is very vast.
The meaning of رَاضِيَةً is the inhabitants of the heaven who observes all the promises of the Beneficent God and get rewarded entirely above their expectations. The kindness and favors of Allah reaches them completely and makes him delighted and gratified.
And the meaning of مَّرْضِيَّةً is that he is accepted by the beloved the All Admirable God.
In some of the definitions, they said: these ayat are about the Hamzah alaihis salam ‘the head of the martyrs” and it is to be noted that this Sura is Meccan may be it is just a comparison. Battle of Uhud was fought on the ground below the mount Uhud near Medina Munawwara.
In a narration mentioned in the book of Kafi by imam Jafar e Sadiq alaihis salam we read: one of his companions asked: Is it possible that a believer is dissatisfied when his souls is captured (by the angel of death)?
He replied: I swear by the Almighty Allah that when the angel of death arrives to grasp the soul of a believer, he becomes uncomfortable. The angel of death says: O friend of Merciful God do not be uneasy. I swear by the One who appointed Muhammad sallallaho alaihi va ala alehi as the messenger, I am kind to you more than your loving father. So open your eyes widely and see me. Then the dyeing person observes Prophet Muhammad sallallaho alaihi va ala alehi, Amirul momineen Ali, Bibi Fatima, Imam Hasan, Husain and all the imams from their progeny (salutes to them all). The angel of death adds: Meet them they are Prophet of Allah Muhammad sallallaho alaihi va ala alehi, Amirul momineen Ali, Bibi Fatima, Imam Hasan, Husain and all the imams from their progeny. Salutes and conveys salam to all of them, they are all your friends and well wishers.
He opens the eyes and watches them; suddenly an announcer from the Sublime and Bountiful God declares and says:
يَا أَيَّتُهَا النَّفْسُ الْمُطْمَئِنَّةُ (89:27)
O the one who have full confidence upon the prophet and his family return back to your Benevolent Creator God as you are whole heartedly pleased with their guardianship ولايت and the God with all his virtues is highly pleased with you. Enter among my selfless and dedicated servants, they are Muhammad sallallaho alaihi va ala alehi and his blessed progeny in my heaven. In those moments for a believer it is dearer, his soul, to leave the body and join the proclaimed, the herald and announcer of the Appreciative and Protector God.
The virtues of reading Sura e Fajr
One who reads this sura on the initial 10 nights of the month of Zilhaj the Bestower and Exalter God forgives that person’s sins. The one who reads it on the other days of the year, there will be lustre and sparkles of lights for him on the judgment day.
In a hadis from imam Jafar Sadiq alaihis salam: Recite Sura e Fajr in every obligatory and recommended namaz which is called the sura of imam Husain ibn Ali alaihis salam the one who reads it, on the day of resurrection he will have the honors to be with imam Husain ibn Ali alaihis salam in the heaven.
This Sura is introduced by the name of imam Husain ibn Ali alaihis salam as he was the clear
Nafs e mutmainna النَّفْسُ الْمُطْمَئِنَّةُ example of
In a narration of imam Sadiq alaihis salam these ayaat are mentioned as follows:

The ten nights are described as the first 10 nights of the month of moharram which has specific connection with imam Husain ibn Ali alaihis salam.
Any ways the rewards are for those who by reading and acquiring the clues of this Sura correct their character and built a perfect inner self.
O the Forgiver Lord bless us such a peaceful and satisfied soul that we too get the status of being addressed by such a great title.
O Lord the eminent Sustainer and Provider, reaching this status without your help and support is impossible. Bless us your kindness and benevolence.
O Lord of Lords we know possessing a peaceful soul is impossible except under the shadow of your remembrance, grant us the blessing of your remembrance to our hearts.

[Video] Are those who know, equal to the ignorant, according to the Quran?