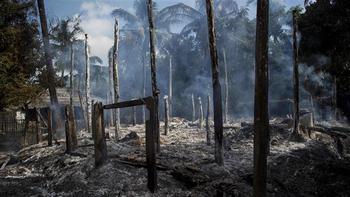 SHAFAQNA – Jahangir Mohammad, director of the Center for Muslim Affairs from Manchester, said Myanmar’s government and military are pursuing the agenda of ethnic cleansing in Muslim-populated areas.

“We’ve seen over the last four or five years that the Rohingya Muslims are being slowly cleansed from society,” he told us.

“The military and even the politicians are all signed up to this agenda and they don’t care about the lives of Muslims,” he added.

Mohammad said what is taking place against Muslims in Myanmar amounts to “a genocide,” where members of the Rohingya community has been slaughtered, expelled and made stateless.

According to the activist, Myanmar’s civilian leader Aung San Suu Kyi has done nothing to stop the violence against the Muslim minority in her country. “She has been totally silent on the matter and silence is complicity.”

He also criticized the international community’s response to the crimes being committed against Muslims in Myanmar during the past four years.

“If this was happening to any other community in the world particularly a non-Muslim community, there would be outrage and people would be open arms and perhaps military would be sent to that part of the world to put the Muslims down,” Mohammad said.

The United Nations has reported that Rohingya Muslims are one of the most persecuted minorities in the world. Many of the Muslims in Myanmar have been killed while tens of thousands have been forced to flee as a result of attacks by Buddhists.

Censorship against Shia media in Egypt