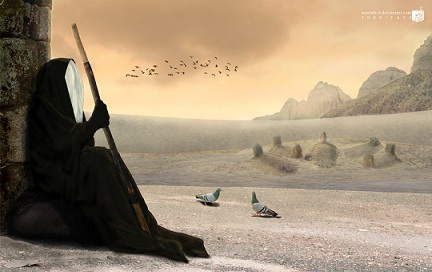 SHAFAQNA – Some years after the martyrdom of Hazrat Fatima Zahra -S.A- Imam Ali -A.S- expressed his desire to his brother Aqil bin Abu Talib -A.S) to marry a woman of a brave tribe. Hazrat Aqeel was a very knowledgeable in tribe genealogy and he immediately proposed the name of Hazrat Fatima binte Hazam bin Khalid and the marriage took place soon after.

Much earlier during 8 A.H., Imam Ali -S.A- had been given the prophecy by Prophet Mohammad -pbuh- of a brave son who would be martyred alongside with his brother Imam Hussain -A.S) on the day of Ashura. Ever since then, Imam Ali -A.S- had been waiting for the birth of that son which came in the person of Hazrat Abbas -A.S-

The woman, who bore and brought up that Hero – Hazrat Abbas -A.S.-, the standard-bearer to Imam Hussain -A.S.-, was Umm-al-Banin -A.S-. She was the daughter of Hazam ibn Khalid and wife of Imam Ali -A.S-. She was from the courageous family of Bani Kalab. Her maiden name was Fatima, but when she bore Imam Ali four sons — she was called Umm-al-Banin -i.e., mother of sons only-.

After the arrival of Imam Sajjad -A.S- and Hazrat Zainab -S.A- in Madinah Hadrat Ummul Baneen used to continuously gather women in her house and narrate them how Imam Husain a.s.- and his companions were martyred by Yazidi forces.

Hazrat Ummul Banin -S.A- was a great poetess and she is considered as the first Noha -lamentation poetry- reciter for the martyrdom of Imam Hussain -A.S-. She used to visit regularly the famous Jannat ul-Baqi cemetery in Madinah and recite her Nohas in a very sad voice that everybody present there used to weep bitterly.

She transformed the Jannat ul-Baqi cemetery in Madinah as “the Centre of Azadari of Imam Husain -A.S-. The Nohas recited by Hazrat Ummul Banin for the martyrdom of Imam Hussain -A.S- are recorded in history and are considered as masterpieces in Arabic literature.

Is it permissible for men to wear white or yellow gold?