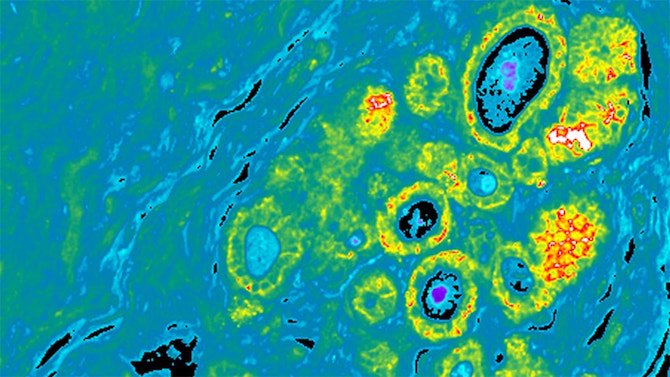 When a woman is diagnosed with the earliest stage of breast cancer, how aggressive should her treatment be? Will the noninvasive cancer become invasive? Or is it a slow-growing variety that will likely never be harmful?

Seeking to answer these questions, researchers at the University of Michigan developed a new technology that can identify aggressive forms of ductal carcinoma in situ (DCIS), or stage 0 breast cancer, from nonaggressive varieties.

“A patient with DCIS is typically treated as if she has invasive disease, which is easy to understand. When women hear breast cancer, they’re petrified.”

“And physicians are keenly concerned about outcomes as well,” says study author Howard R. Petty, Ph.D., professor of ophthalmology and visual sciences and of microbiology and immunology.

“But DCIS is not the same disease for everyone. If we can identify potentially nonaggressive lesions, perhaps those women don’t need aggressive treatment.”

BRIM combines traditional pathology techniques and fuses it with mathematical analysis to determine the relative levels of certain biomarkers in a tumor.

Petty and co-author Andrea J. Clark looked at biopsy samples from 23 patients with DCIS. They used fluorescence imaging, in which tumors are stained to identify key biomarkers. Each biomarker was stained a different color.

The stained samples were then entered into a computer program that determines the ratio of biomarker in each pixel.

Some biomarkers are highly expressed in cancer; others have very low expression. With BRIM, researchers take the ratio of expression. This means high and low do not cancel each other out, but rather combine to form an image of improved contrast.

Using this technique, researchers could separate the DCIS patient samples into those with a lot of cancer stem cells — which are highly aggressive — and those that resembled benign tumors. They found 22% of the samples had low scores suggestive of very slow-growing, nonaggressive disease.

“This approach is going to be a new and powerful one. It works because we’re looking at it mathematically,” Petty says. The results are published in the Nature journal Scientific Reports.

Ratio imaging microscopy was used in the 1990s to look at calcium signals. Here, the researchers resurrected this technique and applied it using antibodies and biomarkers.

Biomarkers were selected based on an extensive literature search. The researchers suggest that another advantage to BRIM is that it combines multiple biomarkers, rather than relying on a single marker.

Rates of ductal carcinoma in situ have increased since screening mammography became common. Some experts believe that DCIS can become invasive breast cancer, but this has not been proved. Currently, there is not a way to stratify the disease based on aggressiveness.

The researchers suggest that in addition to preventing overtreatment, BRIM could be used to help more broadly with breast cancer treatment decisions. As the biomarker literature becomes more expansive in other cancer types, the researchers say they will expand their work to other forms of cancer.

The University of Michigan has filed for patent protection on this technology and is currently assessing options to advance it toward market.

Nanoparticles Are Moving Us Toward a Cancer-Free World

Does Chemotherapy in Breast and Ovarian Cancer Patients Cause AML and MDS?