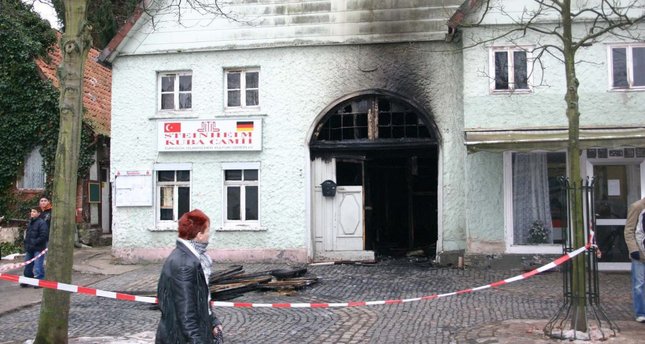 The intensified far-right populist political rhetoric has been the new specter haunting European society’s core liberal democratic values, with Muslims designated as the new scapegoats, leading to an exclusionary and discriminatory atmosphere on the continent. Experts have suggested that European society has chosen Muslims as the new Jews, shifting from anti-Semitism to a new anti-Muslim stance.

The rise of violence against migrants in general, and Muslims and Turks in particular, has become more visible in recent years, especially due to the refugee flows into the continent, escaping from conflict zones in the Middle East and North Africa.

According to a recent report by Germany’s Ministry of Interior, for example, crimes motivated by far-right tendencies have reached a record high of 23,555 cases in 2016, including 1,698 of which that were classified as violent attacks. Anadolu Agency reported that Interior Minister Thomas de Maiziere said the increasing scale of violence was a worrisome development. “Violent offences have increased significantly; this should be a real concern to us all. We are particularly witnessing an increase in grievous bodily harm,” De Maiziere said at a press conference in Berlin on Monday.

A report prepared by EUROPOL, titled European Union Terrorism Situation and Trend Report 2016, which classifies the far-right violence under the heading of “terrorism,” states: “In 2015, Islamophobic crimes against mosques and the Muslim community increased. Poland, for example, reported that in comparison to 2013/2014, the number of cases concerning Muslims and Muslim institutions has doubled and in France numerous incidents of Islamophobic hate crimes occurred, including firebombs, vandalism and threats.”

‘Anti-Muslim rhetoric is the new anti-Semitism’

Farid Hafez, a researcher at the Department of Sociology and Political Science at the University of Salzburg, said that the motives behind today’s anti-Muslim tendencies are not different than those of anti-Semitism. “Obviously, the far right today has chosen to strategically shift from anti-Semitism to Islamophobia, while in essence, it still is very anti-Semitic.”

On April 20, unknown assailants vandalized a mosque in Germany’s eastern city of Leipzig, spray-painting the walls with anti-Turkish slogans, reported as the third attack in Germany within a week that targeted Turkish mosques and organizations. In 2016, 91 mosques were attacked across Germany, which also showed a significant increase in anti-Muslim violence.

“The general xenophobic campaigns of the 1980s have given way to Islamophobia as a specific expression of racism. This development appears reasonable, as Islamophobia has somehow become a kind of ‘accepted racism’ and cannot only be found on the margins of European societies, but rather at the center. Hence, Europe’s far right tries to become compatible to a wider electorate,” Hafez had said in an article, titled “From Anti-Semitisim to Islamophobia: The European Far Right’s Strategic Shift,” and penned in 2015.

Austrian authorities pressed charges in about 1,690 cases related to right-wing extremism in 2015, the highest number to date in a single year and up from 1,200 in 2014, a report by Austria’s domestic intelligence service BVT showed. In addition, Austria’s far-right Freedom Party (FPO) has called for a law banning Muslim symbols, saying Islam could wipe out European society. The Netherlands’s anti-Islam Dutch deputy Geert Wilders and his far-right Freedom Party has called on similar actions against the country’s Muslim minorities.

Sophia Rose Arjana, a visiting Assistant Professor of Islamic Studies at Iliff School of Theology, and the author of Muslims in the Western Imagination (2015) said: “Concerning Muslims as the ‘new Others,’ I would suggest that based on my scholarship, Muslims have been Others for a long time.” Arjana adds that “anti-Muslim rhetoric has been expressed through fictional Muslim characters – a process that has been ongoing for over 1,000 years.”

Karin Creutz, a researcher at the Centre for Research on Ethnic Relations and Nationalism (CEREN University of Helsinki), also said that there are similarities between the period of anti-semitism and the new anti-Muslim period. “If you look at the rhetoric on social media and in extreme right politics, it already bears similarities to the anti-semitic propaganda before the Holocaust,” she said.

“The upswing of anti-Islam political leaders has been going on for a decade already, with representatives such as Marine Le Pen and Geert Wilders. To end this trend of oppressive politics, there needs to be more knowledge about the dangers of polarizing rhetoric and about the important role of immigrants and Islam in European history,” Creutz added.

In addition, throughout 2016 a large number of violent attacks against mosques, refugee centers and establishments owned by Turkish citizens were widely reported in media, particularly in Germany, France, Netherlands, and Austria. In a recent article penned for Anadolu Agency, Adam McConnel, a writer who teaches Turkish history at Sabancı University in Istanbul, said the Turks become the new victims, seen as threats in previous centuries. “European media’s feverish depictions of Turkey long ago abandoned any semblance of objectivity. Just as Europe’s religious wars did not end interfaith violence, the world wars and Nazism did not end its racism or racially fueled politics. And notably, this disturbing development is seen in the international press only from a broad ‘rise in Europe’s right-wing’ perspective, and the specific anti-Turkish aspects are largely ignored.”

The anti-Turkey position in some European countries has particularly been visible during the campaign period for Turkey’s referendum on constitutional changes. Germany, Austria, Switzerland and the Netherlands canceled events organized by Turkish communities for Turkish ministers in support of the changes, including deportation of the Turkish Minister of Family and Social Policies, Fatma Betül Sayan Kaya. Several far-right politicians across Europe also called on Turks who backed the “yes” campaign to leave Europe and return to Turkey. Turkish media reported on April 21 that German-Turkish citizens in the German city of Brühl received unsigned letters threatening them if they do not leave the country.

Survey: One in ten Germans had not yet heated their homes by end of November despite cold weather

[Video] Analyzing the rights of children in Islam