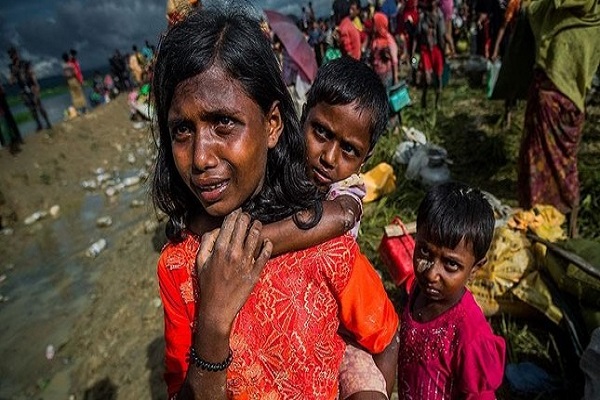 SHAFAQNA – The United States’ largest Muslim civil rights and advocacy organizations, Council on American-Islamic Relations (CAIR), Islamic Society of North America (ISNA), Muslim American Society (MAS) and many others took their grievances to the US capitol.

Civil society representatives from various backgrounds called on the Myanmar authorities to end the bloodshed and urged the Trump administration to act more effectively on the persecution in Rakhine state as well as use its influence on the Myanmar government.

Since Aug. 25, 603,000 Rohingya have crossed from Myanmar’s western state of Rakhine into Bangladesh, according to the UN.
The refugees are fleeing a military operation and Buddhist mobs that killed men, women and children, looted homes and torched Rohingya villages.

“If this is not a genocide, I do not know what is,” Oussama Jammal, Secretary General of the US Council of Muslim Organizations (USCMO) said, recalling the United Nations’ ‘genocide’ definition.

The UN has documented mass gang rapes, killings — including infants and young children — brutal beatings, and disappearances committed by security personnel. In a report, UN investigators said such violations may have constituted crimes against humanity.

ADAMS Center President, Seyid Mukher stressed that American Muslims should impress upon the US government to act against the violence.

“This genocide was happening in Rakhine State yesterday. It is happening today but it should not be tomorrow,” he added, saying the persecution of Rohingya people has been going on for decades.

Protestors chanted against Myanmar authorities, carried banners reading “Stop the genocide in Rakhine now” and “Save our brothers and sisters in Myanmar”.

According to Bangladeshi Foreign Minister Abul Hasan Mahmood Ali, around 3,000 Rohingya Muslims have been killed in the Myanmar crackdown.

The Rohingya, described by the UN as the world’s most persecuted people, have faced heightened fears of attacks since dozens were killed in communal violence in 2012.