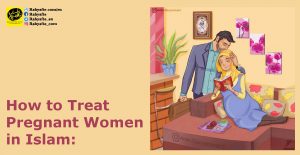 Though you may find some demands as insignificant matters but those negligible things may have big impacts on life when husbands don’t understand the wife’s point of view and their condition.

Pregnancy is a time of exhaustion and weakness. That is described in the Holy Quran, where Allah, may He be glorified, says (interpretation of the meaning):

Although serving the husband is a duty enjoined by Islam, it is also limited to that which the woman is able to do. So it is not permissible for the husband to burden his wife with that which she is unable to bear of combining the burdens of life, working outside the home and bearing children. As pregnancy is a reason for which some duties are waived, such as fasting, then it is more appropriate that it should be a reason for it being obligatory for the husband to take care of his wife and show compassion towards her with regard to her serving him and taking care of the house.

Although the basic Islamic principle on which the scholars are unanimously agreed is that “hardship dictates that things should be made easier”, and there is corroborating evidence that confirms that, it is also essential that the wife’s serving of her husband should not lead to extraordinary hardship or a great deal of hardship.

During this sensitive matter, it is not just a test for the wife alone, but also for the husband as they will be giving birth to their future generation.

Pregnancy is always exciting news for couples. It becomes the new stage of their married life while preparing for the bundle of joy. Besides excitement, nervousness also takes part in the time of pregnancy. Whether it is the first pregnancy or not, pregnant women become overwhelmed by loads of conflicting emotions, anxiety, joy, fear, uncertainty, and such.

A good husband should help ease wife’s burden of house chores. For example, help her cook and ask if there is anything you can help with. If husband does not think he can help his wife with house chores, he can ask other people to help her. It is the duty of the husband to always provide comfortable ambiance. Touch her with love, caress, and other things to make her feel comfortable. Besides, husband should also provide comfortable housing or bed to help her feel comfortable. A husband should never miss any process during pregnancy from the very first time until labor. Unless a husband has a very important job that cannot be ignored, and the wife understands his condition, it is important to stay by his side until the baby is born.

Duties during Pregnancy  (The following is by: Hojjat al-Islam Shaykh Husain Ansariyan)

The time of pregnancy is a very difficult period with anxiety and various physical and spiritual stresses, although a mother is the center of love and affection, an example of God’s Mercy and eager to have a baby and see her child’s pretty, innocent face. The husband, the relatives of both and their friends should all take care of her at all times, since any yelling or screaming, vulgarity or bad-temper, or any form of bothering the pregnant women will not only hurt her, but it will also have a bad influence on the baby. If the couple lives in the house of either one of their parents, then their parents are morally bound and religiously obliged to not only avoid provoking the husband against his pregnant wife, but also to be considerate of the pregnant woman. The man’s parents should seriously avoid interfering in the couple’s peaceful life and the woman’s parents should try not to be picky about the husband. Both sides are seriously responsible for the couple and the unborn baby.

The bride is God’s trust in the family of the groom. She has left her own family with lots of hope and aspirations and has entered a new life. The groom, also, is God’s blessing in the family of the bride. They should take care of these blessings just like their own children. Such caring is in line with the Holy Quran and traditions and is considered to be God’s worship with the reward being God’s pleasure and the eternal Heaven.

Now consider the following verses of the Glorious Quran regarding pregnancy:

Do you not think that we should respect the pregnant woman during this strenuous period of weakness, anxiety and suffering?  Being considerate of her is at first her husband’s moral and religious duty, and next it is the responsibility of all her relatives, so that the physical and mental health of both the mother and the baby are guaranteed.

The time of pregnancy is a boring and difficult period during which the various systems in the body undergo strange changes. If it was not for the love of the child, mothers who have once become pregnant would refuse a second pregnancy. In this period some of the internal glands start to increase secretions, and the body uses more and more nutrients.

However, the pregnant woman cannot eat food property due to nausea, and a lack of appetite. Some women go on a rigid diet to be slim and not let the fetus grow too big and hurt their good looks. They avoid eating good foods so that the baby does not grow so much that their skin wrinkles, or they have to undergo a hard delivery. They do not realize that now they are two people, and their diet must be such that it provides the necessary nutrients for the growth of the baby, too. To keep at a reasonable weight and provide for the health of the mother and the proper growth of the child, a well-balanced diet must be established. During this period of over secretion of the glands, food is absorbed and burnt rapidly. Much of the food intake is absorbed by the fetus, else the women would get really fat.

If the mother neglects God and does not pay enough attention to her religious duties and reading the Quran, then the baby’s mental and spiritual growth will be affected. Pregnancy itself is considered a form of worship with a great reward. The Prophet (Pbuh) said:

“When a woman becomes pregnant, she is similar to one who fasts, stays up at night to worship God, and fights for God with her wealth and life”. [Bihar al-Anwar, v.101, p.106]

Although childbirth is a very pleasant experience for the mother, the father and the relatives, it is very painful for the mother. The Imams have said that labor has a great reward and is considered to be worship.

In Islam, all aspects of childbirth including the delivery room, the midwife, and the people present are closely considered so as to guarantee the physical and mental health of the mother and the baby.

This was said centuries ago by the Noble Prophet of Islam. It is a fact that has been recently discovered by great scientists. In the West where families leave their children to be raised in day care centers and be fed powdered milk, the researches have stated that there is no better food or milk for the baby than the mother’s milk.

Um Salmeh asked the Prophet: Men get all the good rewards but what about poor women?
He replied: The reward of pregnancy is the same as fasting and night worship, and fighting in the way of God with one’s wealth and life. Delivery has such an extensive divine reward which no one can realize. And for breast-feeding, each suck of the baby has the reward of freeing one of the slaves from the generation of Ismael. When the mother stops, a noble angle shall hit her on the side and tell her, start over since you are forgiven [Vasa’il, Al-i-Bayt, v.21, p.451] 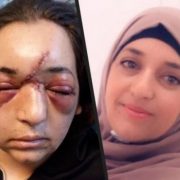 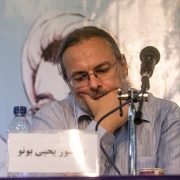 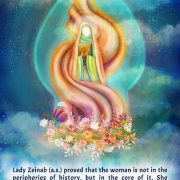 Ayatollah Khamenei: Lady Zeinab(SA) proved that women are in the core of making history 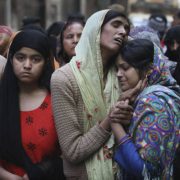