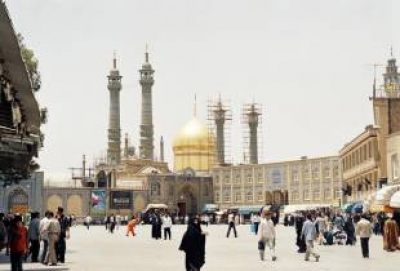 SHAFAQNA – “[I]A lady from my children whose name will be Fatima, daughter of Musa, will die in Qum. On the Day of Judgement this lady will intercede for all my Shi’a to enter Heaven[/I].” (Qadi Nurullah Shustari reporting from the 6th Imam)
The title of Masuma was given to this noble lady by her brother, Imam Ali Al-Ridha (A). It is worth noting that this title was awarded to her after her death and she was not referred to by this name during her life-time. This also nullifies the erroneous view that she died after her brother, Imam al-Ridha (A), on hearing the news of his death.

A question arises as to why she was given this title of “Masuma”? Was she infallible in the same sense as the 14 Ma’sumeen? Several scholars believe that some of the noble personalities from the household of the Holy Prophet (SAW), such as Lady Zainab (A), Hazrat Abbas (A) and Lady Fatima Masuma (AS), due to their proximity to the Ma’sumeen have acquired a high state of purity.

The title, Karima Ahl al-Bayt, means “Noble one of the family of the Prophet (SAW).” This title was given to her by either Imam al-Baqir (A) or Imam Sadiq (A) in a dream seen by Ayatollah Sayyid Mahmud Mar’ashi Najafi, the author of Mashjirat al-Alawiyin.

This noble man was very interested in finding the exact location of the burial place of Lady Fatima Zahra (A), and for this purpose he spend 40 days supplicating, so that he could be privileged with this information.

On the 40th night, after the completion of his prayers, he went to sleep and in his dream he saw himself present at the grave of either Imam al-Baqir (A) or Imam Sadiq (A) in Jannat al-Baqi in Madina. Imam (A) said to him:

“I advise you to go to the Karimat (Noble one) of the Ahl al-Bayt.”

He thought that by Karimat Ahl al-Bayt, Imam (A) was referring to Lady Fatima Zahra (A), and so he answered, “Yes, I have been supplicating for this very purpose, so that I may know the exact place of the holy grave of this noble personality, enabling me to perform her pilgrimage.”

On waking from his dream, the late Mar’ashi made an intention to travel to Qum with his family, in order to perform the pilgrimage of Lady Fatima Masuma (A) and he carried out this intention without delay.

The late Grand Ayatollah Sayyid Shahab al-Din Mar’ashi Najafi, the son of the late Mar’ashi mentioned in the dream above, migrated to Iran in the year 1342 AH. He often cited that one of the reasons for his emigration to Iran was the dream of his father.

The late Grand Ayatollah entered the seminary in Qum in the year 1343 AH and here, he lived in the proximity of Lady Fatima Masuma (AS) until his death in 1411 AH. For over sixty years, he was the first person to perform the pilgrimage of this noble lady. He would wait outside her shrine for the doors to be opened.

In 200 AH, Ma’moon (the 7th Abbasid Caliph), demanded Imam Ali Al-Ridha’s (A) presence in Khurasan. The departure of Lady Fatima’s brother increased sorrow in her heart for it was not long ago that she was separated from her father, the 7th Imam (A).

After a difficult year of separation from her beloved brother, Lady Fatima Masuma (A) decided to go to Khurasan. She began the journey from Madina in the year 201 AH, accompanied by a caravan made up of some members of her household and friends of the Imam (A).

According to one narration, the Imam (A) wrote a letter to his sister, which he sent to her with one his servants, instructing him to hasten to Madina without stopping anywhere on the way.

After receiving the letter from her brother, Lady Fatima Masuma (A), immediately prepared herself for the journey to Khurasan via Saweh.

According to another tradition, the Imam (A) wrote a letter to all his family members, inviting them to come to Khurasan.

It is narrated that after the arrival of this letter, a group consisting of the sons and other family members of the Imam (A), and other Shi’a, numbering over 12000 people made their way to Khurasan.

We find in narration that two separate caravans headed towards Khurasan. One of these groups was the one that Lady Fatima Masuma (A) was in. It was comprised of 23 people, under the leadership of Harun ibn Musa ibn Ja’far.

The other group travelling to Khurasan consisted of about 12,000 people under the leadership of Ahmad ibn Musa ibn Ja’far.

These caravans reached a town called Saweh on their way. Here they were attacked by enemies of the family of the Holy Prophet (SAW).

Many were martyred, including Harun, and many others were wounded or taken as prisoners. A few managed to flee. A woman from the enemies put poison in the food of Lady Fatima Masuma (A) and she became ill.

When Lady Fatima Masuma (A) became ill at Saweh, she enquired from her companions, how far Qum was. She was told 10 farsakh (approx. 60km). She asked to be taken to Qum, which at the time was a centre of the Shi’a. Saweh, on the other hand was hostile towards the family of the Holy Prophet (SAW.)

It is believed that Lady Fatima Masuma (A) died on the 10th or the 12th of Rabi al-Thani and that she spent the last 16 or 17 days of her life in Qum.