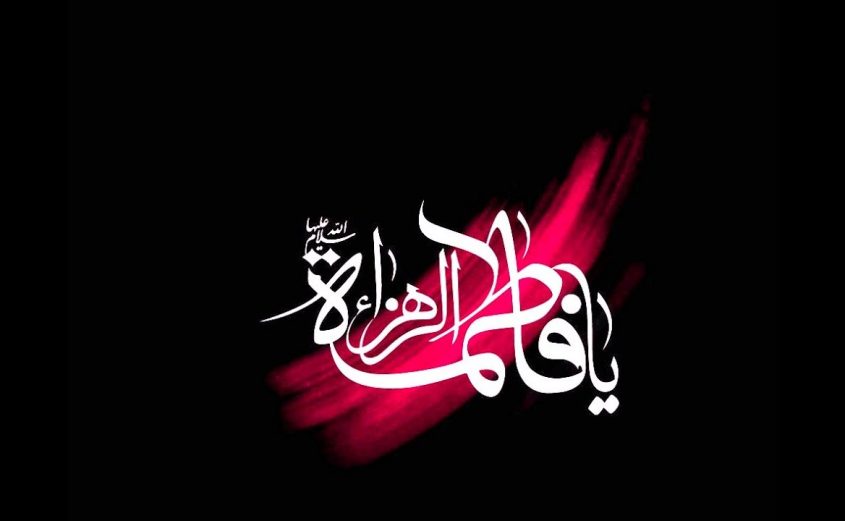 The great lady, Hazart-e Fatemeh Zahra (S.A) was the dear daughter of the Prophet, Mohammad (S.W). Some Shiite scholars believed that she was born on 20th of Jamadi-ul-Sani, 5 th A.H. But the majority of Sonnah research scholars declared that her birth had happened 5 years before Beâ€™sat (Prophetâ€™s a postleship). By the Godâ€™s will, prophet (S.W) named her â€œFATEMEHâ€. She also had some other appellations like: Zahra, Batool, Tahereh, Razieh, Maryam-e Kobra, and Sedigheh.

In her childhood, she contemplated the Meccaâ€™s pagansâ€™ great animosities,
and also suffered 3years in the place named Shaâ€™be Abitalib under a very difficult condition.

Her mother, Hazrat-e Khadijeh (S.A) died in 10th A.H. immediately after the death of Aboutalib, the sincere friend and supporter of the Prophet Mohammad (S.W). This great grief caused that She and Hazrat-e Ali (Pbuh) and the Prophet (S.W) named that year â€œOm-ul-hoznâ€ which meant the Grief year. On 13th of Beâ€™sat (the prophetâ€™s apostleship) on the Prophetâ€™s order, his family and companions immigrated to Medina.

During the time Medina was the deponent of many wars between the Prophet and the pagans, in and out of the country. Hazrat-e Fatemeh (S.A) married to his cousin, Hazrat-e Ali (Pbuh), who was one of the most important characters in Medina. Since Hazrat-e Ali (Pbuh) was always at wars, especially for the ten years after the immigration to Medina, so she accomplished all the responsibilities of the family.

Though Hazrat-e Fatemeh (S.A)â€™s life was full of troubles and sufferings but the death of Hazrat-e Mohammad (S.W) was the most grievous one. The event, which was the beginning of the more bitter troubles such as the pagansâ€™ outrages upon the decency of their family. Those events motivated her to be the great supporter for Hazrat-e Ali (Pbuh). Her speeches in Medina mosque, and the addressees to Ansar and Mohajerâ€™s women, to persuade them to support Hazrat-e Ali (Pbuh) could be mentioned as examples.

Hazrat-e Fatemeh (S.A) died soon after the death of his father because of the imposed spiritual and physical sufferings. She was buried in a secret place according to her will.

Her Excessive Passion for God

The Prophet Mohammad (S.W) asked his daughter: â€œ Dear Fatemeh! What do you wish for? Now here is an angel who has the Godâ€™s message to grant you whatever you want.â€

Hazrat-e Fatemeh (S.A)said: ” I would like to be the Godâ€™s servant and my desire is only to see the wonderful appearance of God.”

Her â€œFearingâ€ of the Divine Punishment:

When the Verses of punishment were sent down to Hazrat-e Mohammad (S.W), he and his companions cried hard. Hazrat-e Zahra (S.A) asked the reason for crying and the Prophet (S.W) recited the Verses to her.

Hazrat-e Fatemeh (S.A) fell on the ground fearfully and said: â€œ Woe to the person who will enter the Hell.â€

Her eagerness to acquire knowledge:

Her father was the best teacher of humanity, morality, Islam and the unity of God .She learned a lot of things from her father and her husband [Ali (Pbuh)].She gathered them all and with the help of her husband wrote a book named “Mos-haf-e Fatemeh”.

Salman Farsi said: â€œ Once I saw Hazrat-e Fatemeh(S.A) with a plain cover. It made me wonder and I thought the daughters of the Iranian kings and the Rome Caesars sat on the golden seats and wore embroidered clothes but why did the daughter of the Prophet (S.W) wear such plain dress and cover?

Hazrat-e Fatemeh responded: â€œ Oh! Salman, on the Day of Resurrection, God will provide us with golden seats and adorned clothes.â€

There are a lot of narrations about Fatemeh Zahra(S.A)â€™s prayers, especially about the prayers in which She had conversations with God. She was the best worshiper.

She was the companion of Her husband:

In difficult situations caused by the death of Hazrat-e Mohammad (S.W), She told Her husband: â€œMy dear Ali! I sacrify my life for you, I will always remain with you. I am in consort with you in all your happiness or troubles and sufferings

Her behavior with her children:

Hazrat-e Fatemeh (S.A) strove to bring up Her children as the brave and virtuous ones in the society.

Why Was She Martyred?

She was the symbol of womanhood. She embodied in her translucent personality all those qualities that made her a paradigm of virtue.

The Prophet saluted at her door. The celestial angels sang her praise. Even God Almighty called her the blessed fountain of Kowsar and vouchsafed her virtue in the Verse of Purity (Holy Quaâ€™an 33:33).

Yet we see a strange sight at her threshold following the passing away of her father. A group is clamoring with democratic abandon, threatening to burn down her house if her husband does not come out and acknowledge the vote of the gathering at Saqifa Bani Saâ€™da.

Was it a demonstration of freedom of expression and thought by the Arabs of Medina? Were they right in questioning the divine decree of Wilayat-a-Mutlaqa to which they had so solemnly sworn allegiance at Ghadeer Khum only a few months before? Or was the devil at work to create dissent and mislead a great nation yet again, as he had done before with the followers of the Prophets, such as Moses (S.A) and Jesus (S.A), in the absence of these divinely appointed personage?

These are the questions that spring to mind when we see the pathetic situation of Medina in the months immediately after the departure of Prophet Mohammad (SAWA).

Power was now in the hands of people who had fled the battle scenes in the time of the Prophet, or had accepted Islam only for political gains. They were now bent upon a destructive course by transgressing the limits set by Allah.

Fatemeh (S.A), tried to awaken them to the injustice and corruption which was in its embryonic stage. She cautioned them against the violations of the principles of social justice that was to permeate the Islamic administration so painstakingly built by her father, but to no avail. She warned:

â€œOâ€™ Muslims! You have been advised not to leave us, not to leave the Prophetâ€™s family alone and keep distance from the axis of Islam (Imamate), otherwise you would be confused and vanquishedâ€¦

â€œHe (the Prophet) left a book that contains secrets as well as understandable and applicable subjects, but Quran is waiting for someone (Imam) to whom it can reveal its secrets, open the doors of knowledge and narrate what is to be read and heard.

â€œOâ€™ Muslims! How can you reach destination from the black and white (mere letters) of Quran, unless there be an enlightened, chaste and well informed scholar (Imam)â€¦

â€œRest assured of the coming sedition. Get ready for a splitting sword and a cruel aggressor, perpetual embarrassment and tyranny of the unjustâ€¦â€

They did not listen. Greed for political power had made them blind and oblivious to divine commandments. The miscreants went ahead and battered down the door of Fatemeh on Fatemeh herself.

The Prophetâ€™s daughter was seriously injured. Although she attained immortal martyrdom, her warnings proved prophetic, especially when we see the tyranny of the Umayyuds and Abbasids that followed the â€œdemocratic voteâ€ of Saqifa and the splintering of Muslims into parties and sects.

. She was a divine creature who appeared in human bodyâ€¦

â€¦Hazrat-e Fatemeh (S.A) was a woman who came up to all the prophetsâ€™ hopes and desires. She manifested all the honorable character and prestige. She was not an ordinary woman. She was a divine woman and the sign of humanity â€¦She is the pride of the world.

Where is her grave?

The Muslims have been deeply pained.
Their beloved prophet has passed away.
And especially for his kith and kin,
it is one of their lives’ saddest day.

A lady who happens to be his daughter,
above all, is the most afflicted one.
She was the nearest to her father.
Alas! Her troubles have just begun.

What in the Prophet’s eyes was her status,
unfortunately the people shall forget.
She should be respected by all of us.
But a harsh treatment, she’ll be met.

Everyone had heard her father say,
“My daughter is a part of me”.
For her safety he would often pray;
Not wanting her to bear any agony.

But his words fell on deaf ears
as his followers were lead astray.
And were realized those worst fears,
because his tidings were disobeyed.

Each forthcoming day brings her sorrow
and only a few more months she’ll live.
Each night she worries about her woes.
Her tormentors, she may not forgive.

In her last days, she is seen weeping.
Awake all night, she seldom sleeps.
Of her troubles, she keeps thinking.
The wounds in her heart are so deep.

The thoughts of her father alone
cause tears from her eyes to flow
and what will happen to her children?
What fate do they have in stow?

“Be kind to them and take care”,
she wills about her poor children,
because she’ll be no longer near
and they’ll soon be orphans.

As she spends the time crying,
her neighbors come and complain.
But look! She is already dying.
Their complaint will be in vain.

And that dark moment finally comes,
for her heavenly abode, she departs.
Holding back their tears, her children,
see baba leaving with a heavy heart.

Hands trembling and with great anguish,
he takes away her coffin during the night.
And he makes sure to fulfill her last wish.
She will rest, out of everyone’s’ sight.

Has gone from this world forever,
the mother of children so brave!
But why was she buried in a manner
that no one knows, where is her grave?

The Reward of Loving Ahlul-Bayt (A.S.) 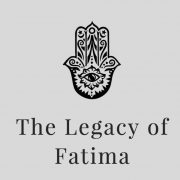 "The Legacy of Fatima": A meeting on The Role of Women in Shia Islam, in Cambridge

Sermon of Lady Zaynab (s.a) in the Court of Yazid 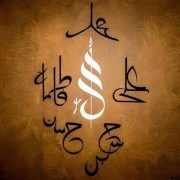 Who are the Prophet's Ahlul-Bayt (AS)? 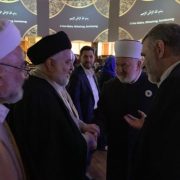